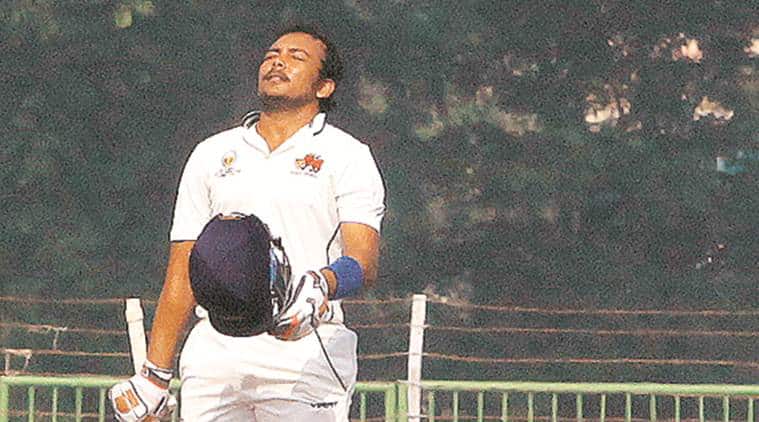 The longest wait is often the sweetest too. Prithvi Shaw had never waited this long —precisely 463 days — between his first-class hundreds. Or any hundreds for that matter since his adolescent days at age-group cricket, scoring heavily at each entry.

The last was on his Test debut, against West Indies in Rajkot. The latest arrived on Wednesday, a shellacking double hundred against Baroda, his first at this level, and more importantly a stinging statement that the forced layoff from the game has only reinvigorated his desire and motivation to reclaim his Test stripes.

The 202 off 179 deliveries was as destructively freewheeling as it could get, Sehwagian in tempo and audacity, besides its game-changing dimension.

When Shams Mulani wrapped up Baroda for 307, three overs into the day, it seemed Mumbai would be content with the 124-run first-innings lead. Most sides would have settled for it, in their season opener. But not a rejuvenated Mumbai.

Not a pumped-up Shaw.

He began in blistering fashion, tearing the new-ball operators apart to all parts of the leafy ground. Baroda chopped and changed their bowlers around and set different fields but Shaw was unstoppable. Just before they parted for lunch, he slog-swept Krunal Pandya to complete his ninth first-class century. Off merely 84 balls. The scoring rate shouldn’t surprise, it’s the way Shaw has always approached the game.

But it’s after his hundred that he tends to become over-adventurous, a reason he had yet to complete a double century. So he was relatively watchful in the second session, consuming 62 balls (brisk for most batsmen but not Shaw) to complete his 150.

Later in the day, Shaw revealed he was determined to put a prize on his wicket. Shaw wanted to be better than before —he knew the values of converting hundreds to double hundreds, to let the big scores do the talking. And then he broke loose — taking only 28 more deliveries to complete his maiden double hundred.

The thought of a double hundred hardly crossed his mind, until he was well past his 150. “It (200) was never on my mind. I was trying to score runs. That’s it. But as I got closer to 200 runs I thought it’s a time to grab it. People do score hundreds, not that it’s easy to score hundreds, but I felt kuch bada karna padega,” Shaw told The Indian Express.

It might not have been so much the thoughts of returning to the national side that might have spurred him on, as all the pent-up frustration that had accumulated in his mind during his ban tenure. The six months was the longest he ever had stayed away from the game. It was difficult. Since the schooldays, his life had shuttled between home and a cricket ground. And now he couldn’t even play in a park in Mumbai.

He still remembers the day he was informed about the failed dope test — self-admittedly due to the contents of cough syrup. He was in Bangalore and it took days for the news to sink in.

He remembered how he and his father were disturbed when the news broke in “Sab log ke he sawal pochte tha. Kya hua, Kaise hua. I was not feeling nice within. Mujhe kisiko moo bhi dekhane ko acha lag nani raha tha,” he recalls.
Shaw’s father advised him to move abroad and spent some time away from the game. The latter he did reluctantly. He went to Manchester, spent the first week sightseeing before he began light gym-work. The trip was a blessing in disguise, he says.

He came back rejuvenated for the Syed Mushtaq Ali Trophy, wherein he reeled out one half-century after the other. He was confident of translating the form to red-ball cricket too. And he did with a breezy half-century in the first innings and a double in the second.

His celebration was muted when he reached his double hundred. “I waited for this day,” he said. Maybe, indirectly, the ban was an eye-opener for him, in terms of gaining maturity and determination. “I feel this is the best time to show the world what kind of game I have. I believe I can do well and conquer things,” he said.

Similar knocks could fuel his comeback bid. He could be in the fray for the third opener’s slot for the New Zealand trip and he admits to nursing such thoughts. “To be honest I do think about the India comeback. I wasn’t dropped and I was out of the team. It was not a nice feeling.”

What Shaw began, Jay Bista sustained and Suryakumar Yadav continued. Bista impressed with 68 off 89 balls before Yadav helped himself to a 70-ball 102 before Mumbai declared on 409/4, setting Baroda a target of 534. With the hosts reeling at 74/3, Mumbai would be already sniffing blood. And Shaw would believe that the double century was well worth the wait. For the longest wait is often the sweetest too.