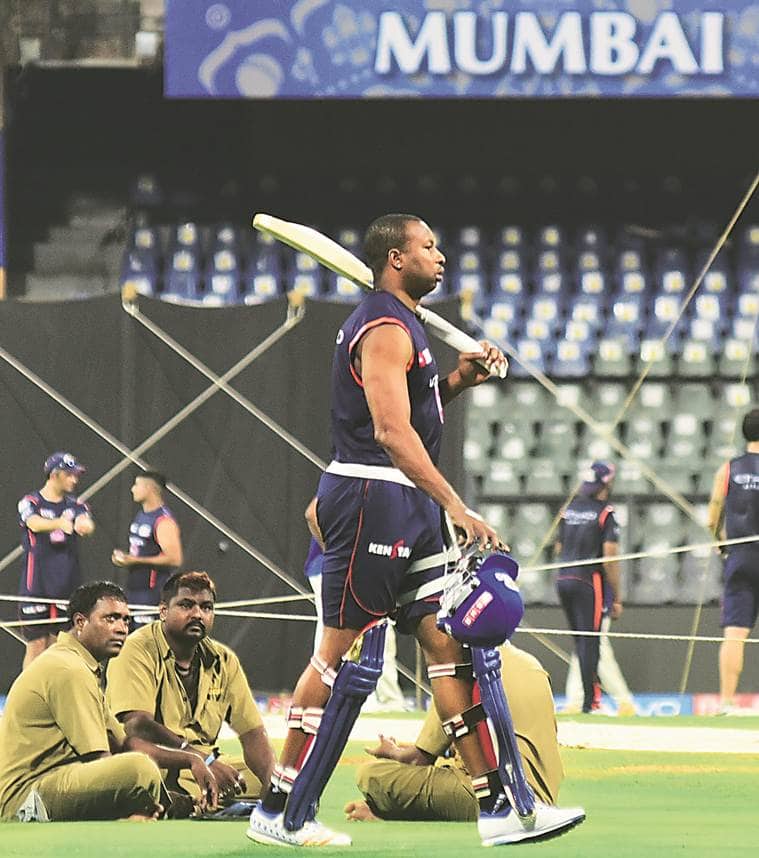 The Swagger Is Back: Kieron Pollard overcame a sustained period of poor form and self-doubt to reclaim his verve by plundering runs in the PSL and playing a key role in Mumbai Indians’ title romp earlier in the year. Express

The day after Trinibago Knight Riders, the side he helms in the Caribbean Premier League, lost a gut-wrenching semifinal to Barbados Tridents, Kieron Pollard turned unusually philosophical on his Twitter handle: “Some things in life are not meant to be and this was definitely one of them and that’s the beauty of life, you never know what the future holds.”

It has been such a staggeringly top-turvy year for Pollard that it’s least surprising that he’s turning philosophic at the slightest of instigation.

At the start of the year, his hopes of pulling over the West Indies’ jersey seemed increasingly bleak. His own game had tapered off, he hardly bowled, and when he bowled, he was terrible.

Pollard wasn’t Pollard. He felt it as much. He told a Pakistan newspaper before the previous edition of the PSL: “I don’t feel like I am Pollard.” It was shadow-Pollard. He was still a towering T20 totem, contracts and pay-cheques still flew into him. But whispers began swirling around that Pollard has lost his Pollard-ness.

Back home, he was unceremoniously dropped from a charity match for the hurricane victims, despite being named the skipper. Lack of batting commitment, the then selector text-messaged him. Pollard took to Twitter again: NOTE TO SELF: Never put your destiny into the hands of persons who do not value it, or anything.”

The next day, then West Indies Cricket Board president Dave Cameron swore he would never let Pollard (and other seniors like the Bravos and Sunil Narine) play a match for the West Indies. He blared: “I am waging a war against them.”

Pollard cringed. His World Cup-to play one more World Cup, he continuously asserts, is his only dream-was all but snuffed out. Worse still, Cameron looked destined to be re-elected the president for the board again. If so, he could never pull on that jersey again. He would eternally live with the “not a cricketer but a pay-cheque player” snub (made by Michael Holding). Pollard himself referred to the plight of himself and the outcasts thus: “We are made to feel worse than the rebels (that toured South Africa)-were skeptical. It was not meant to be, or so it seemed.

Six months later, he could say it was meant to be after all. Pollard was Pollard again. He regained his Pollard-ness again. He went on a punishing physical regimen, knocked off the extra pounds, regained the big-hitting prowess and vented out his fury on hapless PSL bowlers, struck the most number of sixes in the tournament and ransacked runs faster than anyone else in the league.

He reclaimed his athleticism took some catches that set Youtube afire, and took his form to the IPL, where again his murderous knocks, including a 25-ball 41 on a sluggish surface, influenced Mumbai Indian’s title-stomp.

Back home, the direction of the winds in the islands changed with former tourism and sports minister of St Kitts and Nevis, Ricky Skerrit upstaging Cameron.

A few weeks later, he and the fellow outcasts were called for an indoor meeting with Skerrit, from where they came out flashing big smiles and assurance of resurrection. A month later, he almost realised his World Cup dream, narrowly missing out eventually to Carlos Brathwaite as West Indies were crammed with big-hitting all-rounders. And Pollard barely bowled these days too.

There was resentment in his hometown Port of Spain, as West Indies withered away after the initial bluster. But not long could he be overlooked, as director Jimmy Adams outlined the path forward with a massive overhaul of the status quo.

One of the first measures was to reintegrate Pollard — he was included in T20Is against India in Florida and Guyana, before he was appointed West Indies’ white-ball skipper for the series against Afghanistan and India. He was pleasantly surprised: “I was not something that I dreamt of, because it was beyond my dreams. There was a time when I considered myself lucky if I were to play for the West Indies again.”

Not just Pollard, Lendl Simmons and Denesh Ramdin too had resigned to the inevitability of not representing West Indies again. Simmons had (before the Afghanistan series) last featured for West Indies in 2017.

He was not even picked in the CPL this year, before Colin Munro picked an injury and he was hastily brought in as his replacement. He smoked 430 runs in 11 innings at an average of 39.09 and a strike-rate of 150.34.

Meanwhile, Ramdin, a former skipper, was scanning alternate careers. He tried his hand in the media, writing columns and doing commentary.

He even had to pass through the ordeal of a fake newspaper report that he was detained at the JFK Airport in New York for carrying ‘20kg of cocaine’, and thought of even retiring last year. But a discussion with good friend Pollard prompted him to have a rethink, and he subsequently revived himself this year.

“I realised I was trying too hard to change my batting. I realised I can never score runs as fast as Pollard to Andre (Russell), but there’s still a role for me. And my keeping ability is still vital,” he told Trinidad Guardian. As it turned out, some of his steady knocks were crucial to Trinibago reaching the semifinals.

Like the just-returned players, their coach Phil Simmons, too was restored. The T20 World Cup-winning coach was axed six months after the epic final in Kolkata due to “differences in culture and strategic approach”.

But the real reason, according to Simmons, was that he could no longer pay heed to the outside interference in selection. “It’s disappointing for me to know that in any aspect of life … [people would use] their position to get people into a squad; or in this case, get people left out of a squad. It is wrong and I don’t like it and that is my beef with the selection of the team,” he had written a strongly-worded letter to the WICB.

Skerrit, apparently, was impressed by his stint with Afghanistan, who he guided to the 2019 World Cup.

So the limited-over series in India is a reunion of sorts, though only time (and positive results) will whether it’s a retrograde or an inspired move. The start has been bittersweet — they clean-swept the ODIs but lost the T20Is against Afghanistan — but in India they have a considerably stronger side. It doesn’t make the veteran comeback men’s task any easier that others in this squad are barely experienced at this level-like Kesrick Williams, Hayden Walsh junior, Sherfane Rutherford, Khary Pierre, Fabien Allen and Brandon King.

Much of Pollard’s captaincy is untested, apart from that he has guided star-packed a relatively out-of-form Trinibago to the semifinals last year.

But the youngsters of the team praise his guiding skills — Nicolas Pooran says Pollard only motivated him to pursue cricket after a terrible accident, left-arm Pierre says Pollard’s timely advice only made him the thriftiest bowler in the CPL.

Brendon McCullum attested as much to The Trinidad Guardian: “He’s always with players who are not doing well telling them what they can do about it, pepping them up and spending a lot of time comforting them. He’s like a brother, and of course, he can inspire the team single-handedly.” West Indies too would wish for the same, as they plunge into the future with a bunch of wizened old hands. Pollard would merely say: “That’s the beauty of life, you never know what the future holds.”