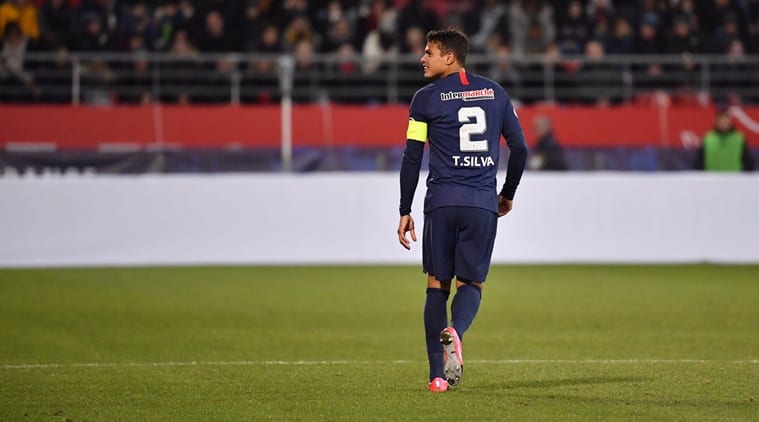 Glaring mistakes have been made in the past three games by center halves Presnel Kimpembe and the 35-year-old Thiago Silva. (Twitter/PSG)

Paris Saint-Germain has more pressing concerns than worrying about whether Neymar will be fit in time to face Borussia Dortmund in the Champions League next week.

Coach Thomas Tuchel’s defense is looking fragile once again. He has so much quality in an attack that has scored 61 goals in the past 16 games that the team does not depend on Neymar going forward.

So Tuchel may be better off focusing his energy on improving a defense which has made sloppy mistakes recently. The PSG back four is set to face the considerable might of Dortmund’s attack in the first leg of their last-16 game on Tuesday.

Neymar has missed the last three games after hurting his rib in a physical league game against Montpellier, where he was repeatedly fouled. Although he has resumed training, he seems likely to miss Saturday’s trip to Amiens.

After all, Amiens is in 19th place and PSG is 12 points ahead at the top, so Tuchel will probably rest the Brazilian. And it’s still unclear whether he’ll be ready for Tuesday.

“I can’t say 100% right now that he’s going to play against Dortmund. We won’t take any risks against Amiens, that’s for sure,” Tuchel said. “We need to be careful, we can’t risk the player’s health. We have a responsibility. It’s a medical decision, the risk is too big.”

PSG is looking to make amends for last year’s round-of-16 loss to Manchester United, where the French team led 2-0 from the first leg but went out on away goals after losing 3-1 at home to an injury-time penalty. That defeat prompted some stinging words from the club’s president and some re-structuring ensued, with the highly-regarded Leonardo returning to reclaim his former role as sporting director.

It also exposed a lack of composure in the PSG side and a frailty in defense that was already evident when it lost 6-1 at Barcelona at the same stage in 2017.

So the pressure is on Tuchel to knock Dortmund out and avoid a fourth straight elimination in the last 16.

But Dortmund has netted 20 times in the past five games, with 19-year-old forwards Erling Haaland and Jadon Sancho scoring freely.

The imposing Haaland has eight goals in five games for Dortmund, having netted 29 in 27 games for Red Bull Salzburg during the first half of the season.

Dortmund’s defense is leaky, with 11 conceded in five games, but PSG’s backline is far from reassuring.

Glaring mistakes have been made in the past three games by center halves Presnel Kimpembe and the 35-year-old Thiago Silva.

In a league game against Nantes on Feb. 4, PSG was 2-0 up until Kimpembe received a pass near halfway and tried an elaborate backheeled flick to a teammate. The ball was intercepted by speedy forward Moses Simon who ran on and scored, after which PSG’s defense looked edgy for the remaining 20 minutes of the game and almost gave up an equalizer.

In a French Cup game against Dijon on Wednesday, Silva had pushed up to halfway when he clumsily trod on the ball, allowing a Dijon forward to run clear on goal and forcing a PSG teammate to scramble away from his own position to cover the danger.

In between those games, PSG led 3-0 at home to Lyon on Sunday only to allow two goals inside seven minutes and PSG was a striker’s near miss away from conceding a third moments later.

Tuchel has steered away from criticizing his defense, preferring to praise the team’s attacking style, but these mistakes will doubtless have been noticed by Dortmund’s young and quick attackers.