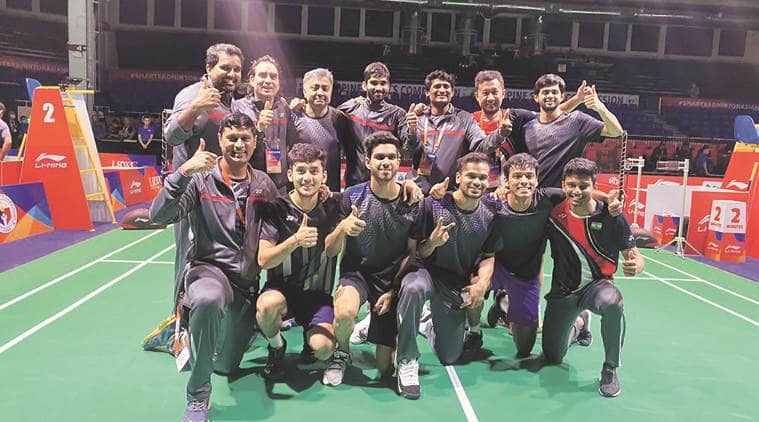 Sai Praneeth and K Srikanth’s losses in the first and second singles, narrowed down the goal for young MR Arjun and Dhruv Kapila. Lakshya Sen won the third singles and the makeshift pairing of Srikanth and Chirag Shetty clinched the tie.

The stage was set in the tie: 0-2 down in the quarter finals against Thailand after the top two singles players lost at the Badminton Asia Team Championships, with furious fans on Twitter slamming the Indian men’s shuttlers and questioning everything from their form to the funding. It’s when India got its first whiff of what a team event can do to individuals: soak in their weaknesses and blow up their strengths.

Sai Praneeth and K Srikanth’s losses in the first and second singles of the five-match event, narrowed down the goal for young MR Arjun and Dhruv Kapila, who were fresh off the Premier Badminton League bursts of preparation.

“Little bit we were under pressure. Things were not going how we’d expected. But still we had to play just our own game. I don’t think there was a lot of pressure, just a bit,” said Dhruv of the situation. What started with the tyros, was mopped up by the pros as Srikanth — strategically fielded to play doubles match 1 with Chirag Shetty in absence of Satwiksairaj Rankireddy — helped India to an astonishing 3-2 win after trailing 0-2 and make the semifinals against Indonesia on Saturday.

Besides Dhruv and Arjun, the young star of the tie was Lakshya Sen playing the third singles who pounced on the 2-1 narrowing of margin by the two, and levelled at 2-2 with a 21-19, 21-18 win over Suppanyu Avihingsanon. Coach Vimal Kumar was chuffed as Lakshya, ranked No 31 beat the 6-footer Thai, ranked No 45. “I am happy they fielded him today. He was really looking forward to playing. I am happy he could play a crucial role in an important tie for India. As a youngster winning pressure games like these, will help him to establish on the big stage,” Vimal, who’d taken the punt on Saina Nehwal at the CWG team event in 2006, said.

Amidst what had seemed like ruins — an endlessly wretched season for India’s top singles players, here was a strategic selection — forced by Satwik’s injury, Srikanth was drafted in for doubles with Chirag. And it’s the two doubles wins that make Vimal even more happy. “This is creditable especially after the disastrous outing yesterday against Malaysia (India lost 4-1).Winning two doubles matches by India is unheard of,” Vimal gushed.

Chirag Shetty had been keeping an 360 eye on the courts, approaching Lakshya, just as Dhruv and Arjun were wrapping up a 21-18, 22-20 win over Kedren Kittinupong and Viriyangkura Tanupat. “We were 0-2 down in the tie and we were just expected to get a point for the team. We had a good strategy before playing. We knew how to control the game from the start and it worked in a very good way,” Dhruv said.

Chirag said after Sai Praneeth went down 21-14, 12-21, 21-12 to Kantaphon Wangcharoen and Srikanth lost 22-20, 21-14 to Thai prodigy Kunlavut Vitidsarn, they did not have much hope. “Arjun and Dhruv were about to win and right before his match I told Lakshya that if you win that match then surely me and Srikanth will give our everything and get that win for the team. And we put up a splendid show. All credit to the team — we gave our heart out. And this is one of the really good team wins for India,” he says of finishing the 3-2 win.

Srikanth grew up as a doubles player till his late teens and drew confidence from sharing court duties with the eager learner Chirag coming off his breakthrough year. “In both first and third game we never lost the lead. So that was very crucial for us. We were leading at least by a point all throughout the match and that helped us keep our calm and we never really gave them the chance to come back into the game,” Chirag says.

As a badminton player, Srikanth has more experience than him, Chirag says, but he is a self assured specialist doubles player and the two communicated well.

India has fielded Sindhu in many team events in the past, and jamming with a teammate invariably frees up the nerves as happened with an under-fire Srikanth. “Whoever was under pressure, the other one was supporting him. If there was a thing I wanted him to avoid then I’d tell him. And whatever he felt wasn’t going right for us, he would tell me the same. Whoever was down was taking the initiative. There was a lot of discussion. Neither of us was directing the other as such,” Chirag says.

They were inspired by Dhruv-Arjun, the youngsters, who were playing a team event for the first time together and nicked the first points playing against the second-best Thai pairing. “When the team was down 0-2 they gave us the important win. Both of them played exceedingly well and gave us that win..and then Lakshya played tremendously well,” Chirag says.

The team would get into a huddle post the come from behind win and chant: “How’s the josh? High sir!” twice.

The BATC has an overpowering whiff of points hoarding for Olympic qualification for the singles players and Indonesia with its world-topper doubles teams and higher ranked singles players pose a tough challenge. Dhruv though is looking forward: “Excited yes and we are ready.”

Vimal reckons Sai, Srikanth and Prannoy are low on confidence and cracking qualification looks uphill right now. But a strange irony coexists: “It’s looking tough, but in fact Srikanth in the Men’s singles is the best bet for a medal if he makes the cut,” Vimal says.

Coach Siadatullah accompanying the team is taking it a step at a time. “Doubles match was very tough, we didn’t expect to win that. But Srikanth supported Chirag well to win. Lakshya played well,” he says.