Kya Aap chamar hain?’ It’s a question that Sudheer Rajbhar has often been asked. His nonchalant and unwavering reply is, ‘I am an artist’. Mumbai-based Rajbhar, 33, was in the news two years ago, when he launched a line of bags and other accessories made not from leather, but with rubber. He named the label Chamar Studio. “In 2017, I started an experiment with white cloth bags, and wrote the word ‘Chamar’ in different Indian languages on it. People are uncomfortable with the word. I wanted to provoke them,” says Rajbhar.

At Chamar Studio, a collaborative space, Rajbhar works with artisans of Mumbai’s famous leather neighbourhood, Dharavi. One who grew in the slums of Kandivali, he launches the Chamar Foundation today in Mumbai. It’s an idea based on the famous Lijjat Pappad franchise, which ensures that the designer and the artisan are on an equal footing. Buckles are conspicuous by their absence and so are zippers on the bags. There is a distinct edginess to them. With a starting price of Rs1,200 to Rs 6,000, they are in the ‘affordable designer wear’ category. 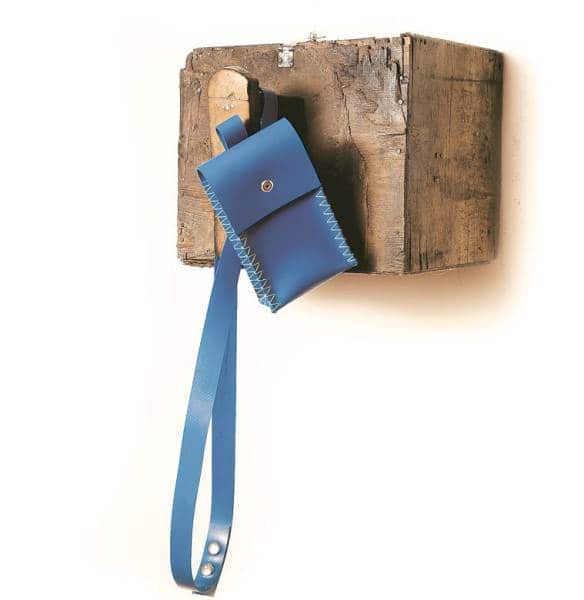 His designer bags made from rubber Express Photo by Debdeep Roy

“While growing up in Mumbai, I didn’t really face a caste issue. The city and its people are too busy just trying to wrangle a living to bother about caste. But the times when I would visit my ancestral village in Jaunpur, Uttar Pradesh, it was different. I remember my dad, who worked with the Indian Postal Service, saying things like ‘yeh log Thakur hain’,” says Rajbhar, who is from the Other Backward Class. He started sketching and painting in school. “My parents didn’t discourage me, and when I joined an art college they thought at least I would be an art teacher, which was good enough for them”.

A graduate of the Vasai Art School, Rajbhar was disillusioned with the curriculum and syllabus at art institutions in the country. After four years of a bachelors degree, he contemplated a masters degree at MSU Baroda, but then became an assistant to artists such as Chintan Upadhyay, Reena Saini Kallat and Navjot Altaf.

The idea to use rubber as a material and be the defining material for Chamar Studio was born out of a chance encounter between Rajbhar and the neighbourhood cobbler, Sachin, when his family shifted to Santacruz. The black tarpaulin, a staple of most Mumbai slum roofs, was the inspiration behind the project. “I was working on this mix-media installation called Bombay Black, which I created after picking up scrap materials, like photo frames, utensils, and paper, from demolished slums. I created a black rubber bag of sorts and put those items in it. Sachin sewed those bags for me. And now he works with me at Chamar Studio,” says Rajbhar.

The idea behind Chamar Foundation, he says, is to be a facilitation centre for artisans. “These leather artisans, in their heydays, made bags for Gucci and Fendi for a fraction of the original price. But today, because of the beef ban, the industry is in shambles. The material we use is rubber, and the bags are hand-sewn. They can make them in their homes and then come to a larger centre for quality check, stocking and sale,” he says.

He wishes to start a dialogue around caste, especially in the world of fashion. “I come from that world, and that helps me to create and work with the people of those communities. I have seen things, even though I have had it better than many people.”

For all the latest Lifestyle News, download Indian Express App